Find out about next year's Summit and other
entrepreneuship events hosted by Cornell:

Find out about next year's Summit and other
entrepreneuship events hosted by Cornell:

It takes daring vision and fearless determination to build an exceptional company that breaks the boundaries of what is thought possible. At the third annual Cornell Entrepreneurship Summit, our speakers will share their experiences and inspire you to strive further. How far beyond the horizon will you go? 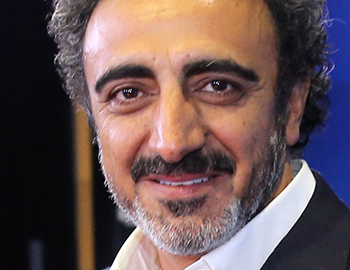 Hamdi Ulukaya founded Chobani in upstate New York in 2005 and launched Chobani Greek Yogurt in 2007. Five years later, Chobani became the No. 1–selling Greek Yogurt brand in the U.S. with more than a billion dollars in annual sales. Led by his passion to democratize better food for more people, Hamdi’s vision for Chobani has effectively transformed an entire food category.Hamdi is a member of the Presidential Ambassadors for Global Entrepreneurship. He was named the 2013 Ernst & Young World Entrepreneur of the Year and earned the Small Business Administration’s Entrepreneurial Success Award. Hamdi is a passionate philanthropist and has pledged to give 10% of profits to charity. He resides in New Berlin, N.Y., with his two German Shepherds. 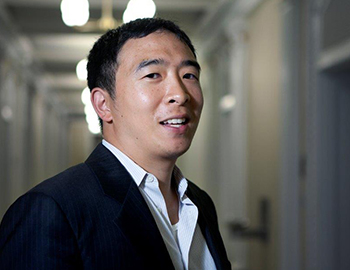 Andrew Yang was named one of Fast Company’s “100 Most Creative People in Business” for 2012 & 2013, and in 2011, he was named a Champion of Change by the White House. As the Founder and CEO of Venture for America, Andrew places top college graduates in start-ups for two years in emerging U.S. cities to generate job growth and train the next generation of entrepreneurs. He is a graduate of Columbia Law and Brown University and the author of Smart People Should Build Things: How to Restore Our Culture of Achievement, Build a Path for Entrepreneurs, and Create New Jobs in America. 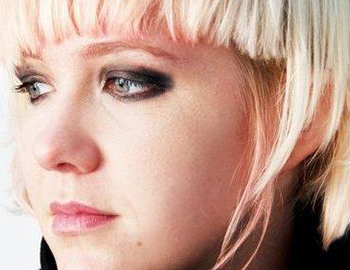 Kegan Schouwenburg is a leading voice in 3D printing and mass customization, and obsessed with bringing nascent technology into the consumer sector. Schouwenburg’s background in industrial design and mass-manufacturing gives her a unique perspective on scalable systems and products, and fuels her desire to bring beauty and simplicity to new markets. Schouwenburg holds a bachelor’s in Industrial Design from Pratt Institute (2007) 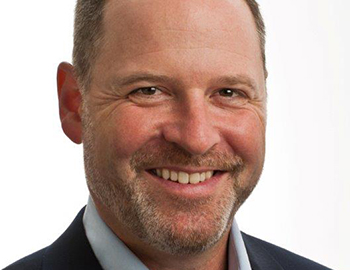 In 1999, Matt Blumberg founded Return Path, Inc. to help businesses build and retain better relationships with their customers and to help ISPs and other mailbox providers enhance network performance. Matt is currently Chairman and CEO of Return Path. Previously, he was General Manager of the Internet division of MovieFone, Inc. (777-FILM) until the company’s acquisition by AOL; he has also worked in venture capital and management consulting. Matt is the author of Startup CEO: A Field Guide to Scaling Up Your Business, published by Wiley & Sons, and he is the Chairman of the Board of the Direct Marketing Association. 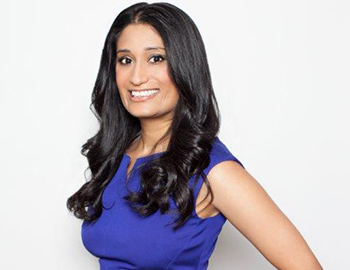 Mona Bijoor is the founder and CEO of JOOR, the leading global wholesale marketplace connecting brands and retailers. Prior to JOOR, Mona was responsible for helping to develop Chanel’s e-commerce strategy, and at Elie Tahari, she spearheaded the strategy to grow the company into a billion dollar brand. Her first-hand experiences with some of the biggest pain points in the fashion industry buying process led to the founding of JOOR, a technology solution to revolutionize the wholesale process. Mona is a graduate of the University of Pennsylvania with a B.A. in Human Biology and an MBA from the Wharton School of Business. 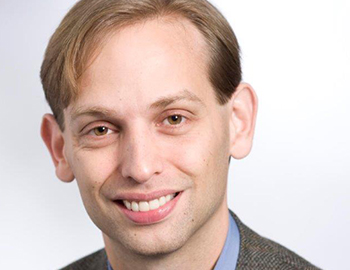 David Berry is an inventor, entrepreneur, venture capitalist, and CEO who has co-founded and helped build over 10 companies in life sciences and sustainability. David was elected a 2014 Young Global Leader by the World Economic Forum and currently serves on the Leadership Council of the United Nations Sustainable Development Solutions Network. Previously, he was named as the Innovator of the Year by MIT Technology Review, and received the prestigious Lemelson-MIT Student Prize for invention and innovation. He received an MD from Harvard Medical School and a PhD from the MIT Biological Engineering Division. 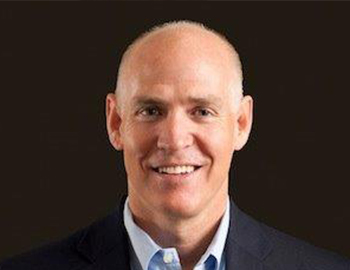 Tom Ingersoll is President and CEO of Skybox Imaging, an emerging provider of data services based on timely high-resolution satellite imagery and video. Previously, he was the cofounder and CEO of Universal Space Network (USN), a leading provider of global ground station services to the satellite industry, where he led the company from start-up and venture financing to become the U.S. sector leader. Tom holds a BS in mechanical engineering and an MS in engineering management, both from Brigham Young University. In his spare time, Tom enjoys spending time with his family along with road and mountain biking. 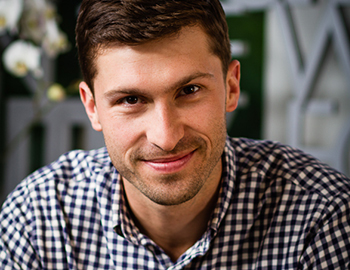 Healey Cypher joined eBay in 2010 following its acquisition of Milo.com. Healey currently leads eBay’s Retail Innovation group. He is recognized as a leader in the retail space, hosting Next Generation of Retail Stores session at SXSW Interactive 2014, and regularly participating in NRF & Shop.org events. Healey's passion is for retail innovation, and he spends a significant amount of energy pulling together technologies from teams within eBay to form new and unparalleled user experiences in the physical retail world. Prior to his tenure at eBay and Milo, Healey worked as a consultant in New York City, and is an alumnus of the Wharton School at the University of Pennsylvania. He is from Nebraska, but spent a majority of his early life in Riyadh, Saudi Arabia. 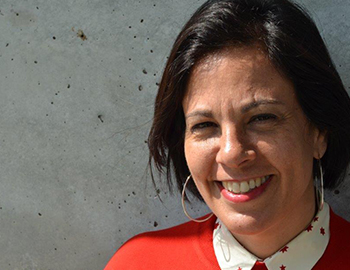 For over ten years, Joanne Wilson has maintained her very popular blog, www.gothamgal.com, as a tribute to what’s happening in NYC and as a forum for Joanne’s many interests. She is currently an active angel investor with a portfolio of over 50 companies and numerous real estate investments. In addition, Joanne has been involved in various education projects and chairs Hot Bread Kitchen, a non-profit committed to increasing access to the culinary industry for woman and minority entrepreneurs. Joanne tells us her most successful venture is being married to her best friend Fred and raising their three kids- Jessica, Emily and Josh. 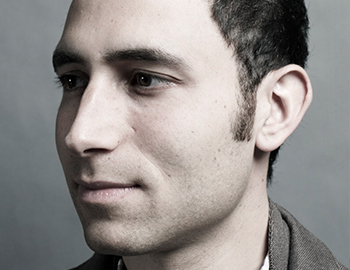 Scott Belsky has committed his professional life to help organize creative people, teams, and networks. Scott is Adobe’s Vice President of Products/Community & Head of Behance, the leading online platform to showcase and discover creative work. Scott co-founded Behance in 2006, and served as CEO until Adobe acquired Behance in 2012. Millions of people use Behance to display and find talent every month. Behance also powers portfolio display for LinkedIn, AIGA, AdWeek, School of Visual Arts (SVA), Rhode Island School of Design (RISD), and many other sites and curated galleries around the web —as well as 10,000+ personal websites via Behance’s ProSite service. Behance also runs 99U, a think tank and annual conference for creative leaders focused on the execution of ideas. He is a frequent contributor on MSNBC and has worked with leading companies and organizations including General Electric, Proctor & Gamble, and Facebook. In 2010, Scott was also included in Fast Company’s list of “100 Most Creative People in Business.” Scott is the author of the international bestselling book Making Ideas Happen (Portfolio, Penguin Books). He also serves as an advisor and investor in several early-stage companies including Pinterest, Uber, and Warby Parker. He attended Cornell University as an undergraduate and received his MBA from Harvard Business School.

Located in the heart of New York's vibrant Times Square District and designed by Renzo Piano, the space houses a gorgeous state-of-the-art auditorium that creates an intimate setting for the Cornell Entrepreneurship Summit. The venue also features an airy lobby and downstairs hall for networking and refueling.

ebay is focused on enabling the future of commerce. We deliver innovative commerce solutions for sellers of all sizes, from entrepreneurs and small businesses to well-known brand and retailers, while helping consumers shop anytime, anywhere. www.ebay.com

Ernst & Young is a global leader in assurance, tax, transactions and advisory services. We believe that innovation and entrepreneurial spirit are the only real answers to providing long-term sustainable growth. That is why an important focus of our work to build a better working world is supporting entrepreneurs — both large and small — in meaningful ways. www.ey.com

Student Agencies Foundation (SAF) is a nonprofit organization dedicated to providing extraordinary opportunities for Cornell students to gain practical skills through experiential learning in business and entrepreneurship. SAF owns Student Agencies, Inc., founded in 1894, it is the oldest student-run company in the U.S. SAF founded the eLab, Cornell’s accelerator for top entrepreneurs. SAF also supports the POPSHOP and E@C.

WilmerHale has helped thousands of entrepreneurs successfully launch their businesses; raise billions in angel, venture and strategic financing; and take their companies to sale, IPO and market leadership. We are able to draw on the full spectrum of renowned services offered by the firm—from intellectual property and labor and employment to tax, litigation, regulatory issues and beyond. www.wilmerhale.com

Wilson Sonsini Goodrich & Rosati is nationally recognized as a leader in the fields of corporate governance and finance, mergers and acquisitions, private equity, securities litigation, employment law, intellectual property, and antitrust, among many other areas of law. www.wsgr.com

Empire State Development (ESD) is New York State’s chief economic development agency. The mission of ESD is to promote a vigorous and growing economy by supporting private sector investment and job growth In New York State. The Innovate NY Fund is a seed stage business equity fund with up to $45 million to support innovation, job creation, and high growth entrepreneurship throughout the state. The Innovate NY Fund is supported with $35 million in State SSBCI funds and $10 million from Goldman Sachs. For additional information, please go to www.esd.ny.gov and Innovate NY Fund.

Perkins Coie is committed to helping our clients build great companies. Attorneys in our Emerging Companies and Venture Capital practice represent clients in a variety of fast-moving industry sectors, including among others life sciences, Internet, software, digital media, retail, telecommunications and cleantech.

For more than 100 years, The Rockefeller Foundation’s mission has been to promote the well-being of humanity throughout the world. Today, The Rockefeller Foundation pursues this mission through dual goals: advancing inclusive economies that expand opportunities for more broadly shared prosperity, and building resilience by helping people, communities and institutions prepare for, withstand, and emerge stronger from acute shocks and chronic stresses.

CB Insights is a National Science Foundation-backed data company that provides predictive intelligence into the health of private companies, their investors and the emerging industries they compete in. Clients include Cisco, Marketo, Red Hat & Gartner and VC firms like RRE, Upfront, and Interwest. www.cbinsights.com, @cbinsights

Interested in learning how your company can be a sponsor? Contact us for more information on sponsorship packages.